Reading Casey Liss’s post got me thinking about how I have managed my photos through the years and how I plan to continue managing them. I’m only going to describe how I managed photos from the point where I got my first smartphone. 1

My needs for photo management are fairly simple:

I am not worried about geotagging, face tagging, clever albums or advanced photo editing.

Photo management in the early days of iOS was..poor. You had a camera and a photo album. Your photo album kept growing and growing until you were faced with a storage issue, which if you were rocking an 8Gb iPhone like me, didn’t take long to reach.

What I’m guessing a lot of people did was delete a bunch of photos to free up that storage, which is a shame because there was no cloud element to this - when they were deleted they were gone. The only way to keep these photos was to do it the old fashioned way. Plug your phone into a computer and back up to your local drive or some other photo management software. But this was slow and not what anyone really wants to be doing. Nevertheless this is what I did at the time and I’m very glad I did.

Moving forward with the cloud

With cloud storage becoming more and more important, it made sense to look into backing photos up to the cloud. There were two main options that I looked into - Dropbox and Google Drive.

Both of these operated similarly, you could turn on auto-upload so that any time you took a photo on your phone it would automatically back up to the these services. I first started to use Dropbox as I was already using it heavily for my college work and had never had any issues with it. Dropbox also released Carousel, which provided a nice interface to view photos backed up to Dropbox as well as extra features like “on this day” where it would pull up photos from several years ago.

I was happy with Dropbox until I hit my storage limit. My free third level student storage had expired leaving me with just the free 5Gb limit. I liked Dropbox, but I wasn’t willing to spend money on it when there was another free alternative with 15Gb of storage - Google Drive. So I then backed my photos to Google Drive.

Dropbox and Google Drive were good, but I wanted something more integrated with iOS and OS X. Apple finally started to show signs of promise in this area with the release of Apple Photos. When it was released I jumped straight on the bandwagon and backed my photos up.

So far I am happy with it. I have over 3,700 photos and 120 videos backed up to it. It’s pretty cool to have every single photo I have taken with a phone since 2009 available on any device. 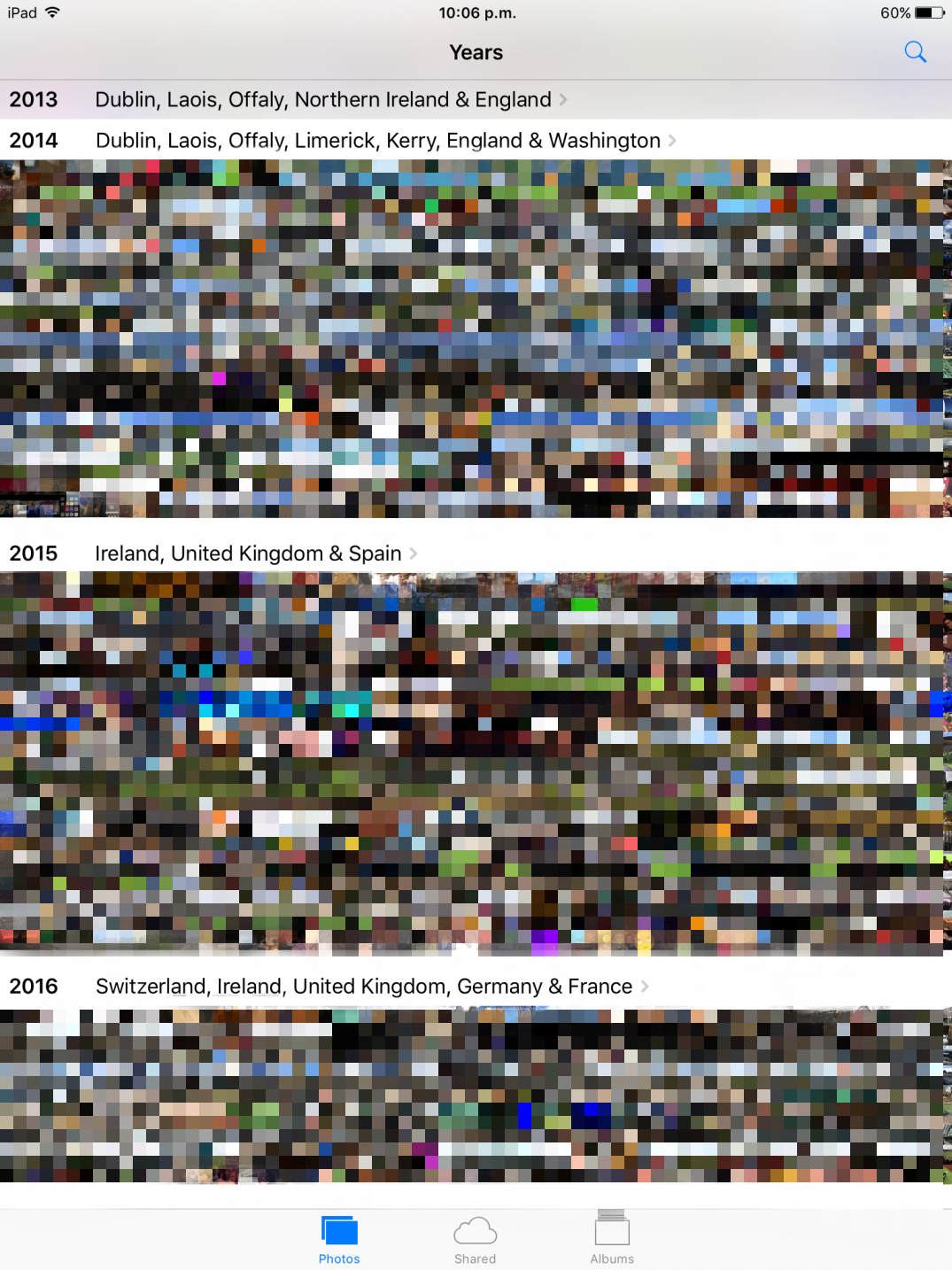 Where Apple Photos is lagging, particularly to Google Photos, is in search. Basic search works for the most part. For example searching for “Spain” or “Manchester” will return photos from those places, but Google have taken this to another level, and I don’t see Apple catching them any time soon. I’m still living in hope that this will be somewhat addressed at WWDC but I’m not holding my breath.

Overall, I am happy with how easy photo management has become. Right now if I take a photo on my iPhone I don’t have to worry about it. It goes straight to the cloud. I can view it whenever I want on another device, or at work or wherever I am. It’s convenient and reliable, which is all I really want from it.

Now if Apple can just iron out the little problems I will be happy. Improve search, add more functionality to the Mac app, add some “on this day” features etc. There’s been a lot of improvement, but theres still a bit to go.