There have been a few articles floating around recently highlighting the increases in app size over the past few years. 1 In another article around the issue, Matt Birchler done some investigating by looking into the app sizes as displayed in the App Store vs. the actual download performed during an update:

There is quite a range between an app’s advertised size and how much data is actually transferred when you update said app. Twitter had the largest discrepancy, showing 122 MB as the app size, but downloading less than 1 MB to perform its update. Clearly the update Twitter rolled out had more impact from delta updates to thin out their update size, and the same is true of Target and Nokia Health Mate, both of which are around 100 MB total, but each downloaded just over 1 MB for their updates.

He further singles out Facebook as a culprit for large updates:

The Facebook app is advertised as being a whopping 251 MB app, and I don’t know what the update size is, but it was over 100 MB. Has Facebook changed so much in the past 3 days since an update that it needed to replace over 40% of its code?

Facebook bring updates to their app at least once every fortnight, complete with highly informative release notes: 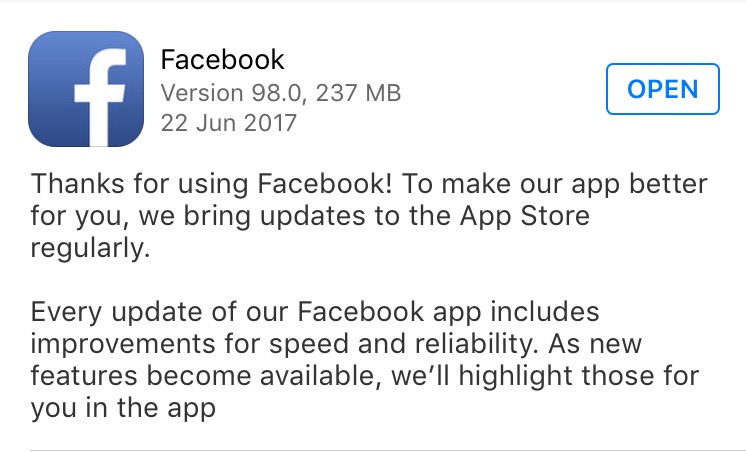 Would it kill Facebook to put a bit more effort into these?

If apps continue this trend of eating memory, then the long awaited increase in base storage size on our devices will soon hit a new wall. Not to mention the data usage behind all of this. If you don’t have an unlimited internet plan then forget it - updating your apps these days means you very likely have a few hundred megabytes to download, and it’s the most popular social networks that are the biggest culprits.

Whatever the solution to this problem is, be it delta updates, app thinning or something even more clever, I hope it’s on the horizon sooner rather than later.