I’ve been perfectly happy with various wired in-ear earphones for the past few years, but after buying the iPhone 8 late last year and spending the next few months wrestling with the lightning-to-headphone adapter, coupled with another pair of cheap earphones breaking, I decided it was time to move to wireless earphones.

I use earphones mainly when walking to/from work or when travelling. I don’t use them for exercise, and I rarely use them for any longer than an hour at a time. I listen to podcasts mainly, so I’m not too worried about sound quality as long as it isn’t notably bad. What is important to me is noise cancellation and comfort.

Initially, I looked into AirPods. They are extremely small, have no wires and are powered by the W1 chip, but reports of poor noise cancellation, along with the worry that they would not stay in my ears, 1 pushed me to look elsewhere. 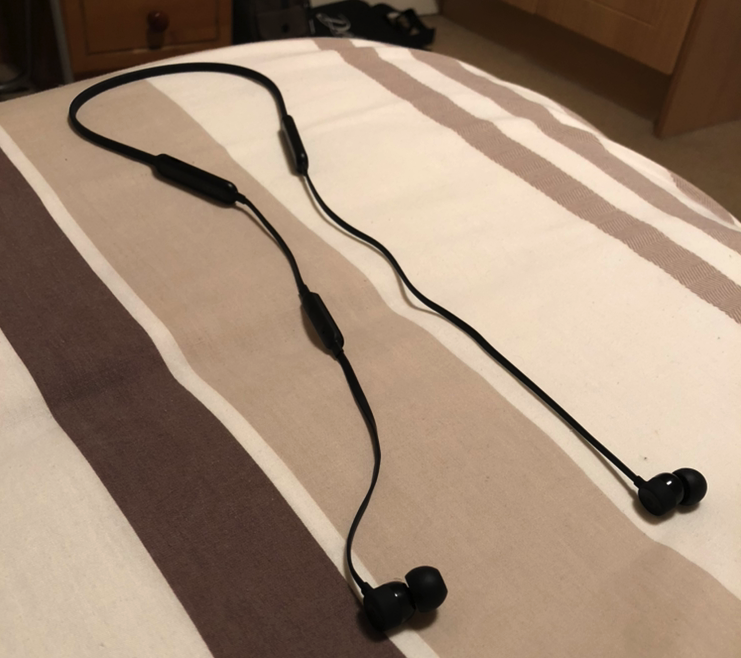 The draw of the W1 chip is what pointed me towards BeatsX. W1 makes pairing earphones to your Apple devices stupidly easy. With the BeatsX, all I had to do was turn them on and I was presented with a “Connect” button. Pressing this instantly connected them to my phone, conveniently naming them “Colm’s BeatsX”. This process is the same on my iPad and Mac, so there are no issues swapping between devices.

One of the unavoidable trade offs of going wireless is that there is another battery to keep an eye on, but I’m happy to report that battery life is extremely good on the BeatsX. I have been using them for over a week now and have only had to charge them once, which is easy to do as I always have a few lightning cables lying around. Beats advertise an 8 hour battery life, and “5 Minutes of Charge = 2 Hours of Playback”, which I would say is accurate based on my early use of the BeatsX. Whether or not that holds up in the weeks and months ahead is another story.

BeatsX fit comfortably in my ears, and I like the fact that I can leave them dangling around my neck while I’m not using them. The design is minimalist and the controls work as well as I’ve come to expect with most earphones.

The chord that goes around the back of your neck is a small bit long for my liking but it’s not an issue really, only when wearing a scarf or a jacket with a high neck.

I don’t use earphones while exercising, but my brother took the BeatsX for a run and was not impressed with how they stayed in his ears. That’s probably very dependant on individuals, but it’s worth noting.

I’d definitely recommend BeatsX. They are a great option for someone looking for cross between standard wired earphones, but something not quite as extreme as Airpods.